Introduction » Actualities » News » The Theatre Square will be beautified with a statue of Charles IV.

The Theatre Square will be beautified with a statue of Charles IV. 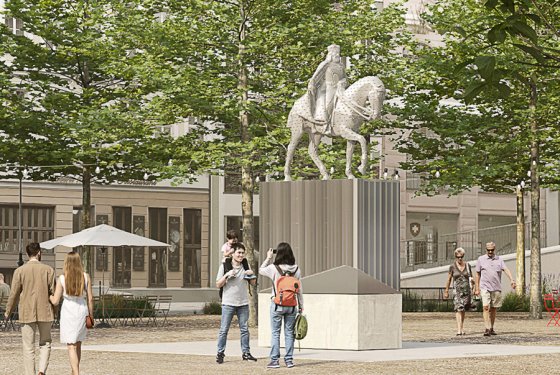 The majestic equestrian statue of Charles IV from the workshop of academic sculptor Michal Gabriel should become a dominant feature of the Theatre Square.

The project was initiated by the Rotary Club of Karlovy Vary, which organised a competition in January 2017 in connection with the celebration of the 700th anniversary of the birth of Charles IV. Out of 13 proposals from 12 artists, the expert jury selected the proposal by prof. akad. Michal Gabriel and recommended the design for implementation.

They are trying to raise funds for the sculpture through a public collection on their website. To date, they have managed to raise more than 2.5 million crowns of the eight million needed. The Rotary Club of Karlovy Vary wants to raise additional funds at a ball named "Vary to Karl", which was originally scheduled to take place on 19 February 2022 at the Grandhotel Pupp, but due to the unfavourable coronavirus situation, it has been postponed to 9 April 2022.

The ball will also include an auction of artworks donated by regional artists as part of the Karlovy Vary Salon 2020 project. The auction will be led by Karlovy Vary native, actor and presenter Aleš Háma. Other stars of the ball will be Monika Absolonová, Ilona Csáková, Josef Vágner and Petr Kolář. Tickets can be purchased on the website https://jezdeckasocha.enigoo.cz ranging from 990 CZK to 5000 CZK.

The concept of the work is a classic monumental realization in the form of an equestrian monument. The sculpture is assembled from 280 pieces of 10mm thick steel sheet. The height of the work, including the plinth, will be 5.6 m with an estimated weight of around 30 tons.

The unveiling of the statue is planned for this year, as part of the opening ceremony of the spa season, i.e. on the weekend of 6-8 May 2022.

In connection with the installation of the statue, other necessary improvements will also be made to the park area in the Theatre Square.