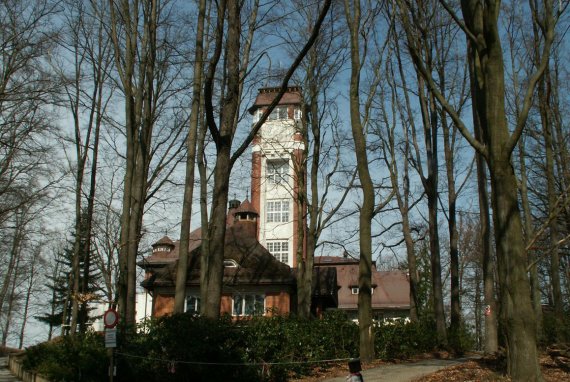 The Doubská Mountain observation tower was built on the highest place in Karlsbad (Karlovy Vary), as the third in a row. The first wooden “scenic bower” was built there in 1845. The observation tower was restored after a forest fire which also engulfed the lookout and was turned into a new stone tower, which soon also included a café. However, in 1904 the entire building was demolished for safety reasons. The present tower was built in 1905 as a modern representative building with a café, terrace and ballroom.

In 1995 the building underwent a total renovation and was occupied by a hotel named Aberg. The lookout in the tower has since served as a hotel suite and the visit there is possible only if the apartment is not occupied.

Both the hotel and observation tower are currently not operating.

The vicinity of the observation tower on the Doubská Mountain is ideal for walking. We recommend taking a walk on the Sova’s trail to the St. Linhart chapel and the nearby ruins of the Romanesque church of St. Linhart. Unfortunately the formerly renowned St. Linhart restaurant is closed also. But a project to restore the restaurant is under preparation.

The observation tower on the Doubská Mountain is best reached by a car if you drive in the direction of Plzeň and Březová. Exit from the main road and drive down about 400 m behind the viaduct to the St. Linhart restaurant. Leave your car there and walk about 1.200 meters on the Tuhnice trail.

You can also get there by train (Karlovy Vary - Březová railroad station, then walk on the Sova’s trail to the St. Linhart and after that continue on the Tuhnice trail.

Another option is to go by the public transport bus No. 6 to the Svatošská bus stop. At the bus stop go back about 130 m, turn right to the Linhart Street, go to the end, where you will reach the Doubská trail, from which you can turn to the Tuhnice trail. The drive from the St. Linhart restaurant is the same as in the previous cases.