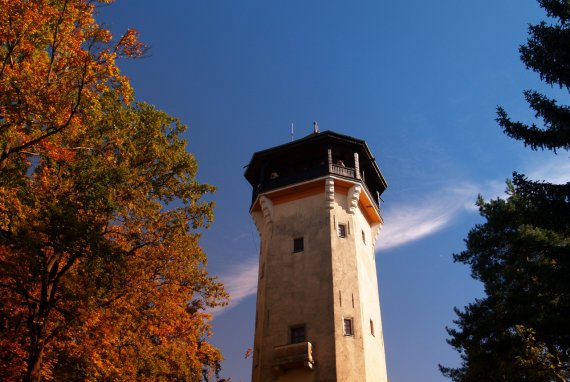 This tower built in 1914 at the height of friendship can be found at the Friendship Hill above the Grandhotel Pupp. You can reach the tower by walking along forest trails or by the funicular, which runs at intervals of 15 minutes. The funicular ride to the lookout tower takes about 3 minutes, but by walking it will take around half an hour.

Observation deck on the top of the Diana tower is at the height of 25 meters and can be reached either by an elevator, or you can stretch your legs on its 150 steps. If the weather is beautiful, you can reportedly see the places at a distance of up to 70 km. How far your eyes can see can be tried every day at NO CHARGE, except during January.

The tower also features the Diana restaurant with a pleasant forest terrace . The restaurant menu consists of a wide range of alcoholic and non-alcoholic beverages and hot and cold dishes. In the summer months the guests can also enjoy “mini-zoo”. Once there, they will find ponies, Cameroon goats, peacocks and Chinese pigs. Butterfly House - a tropical garden with live, exotic butterflies from around the world.

The surrounding area around the Diana tower is literally made for nice spa outings. The area offers neat forest trails, a number of rests in the form of pavilions, beautiful countryside and other attractions. In the Diana's closest surroundings are several forest roads, such as: the Friendship Path, the Marx Trail, the Russell Path, the Fibich Trail, and others. From there you can stroll through the woods to the Jelení skok (Deer Leap), which is in the distance of just over 1 km, or to the other side towards the Charles IV Lookout.